Les Arcs ski resort is made up of 4 towns: 1600, 1800, 1950 and 2000. You can access all four resorts relatively easily when on the mountain. Sadly, the summit was closed when we visited but luckily for us there was still plenty to do. We stayed at 1800, which we chose based on external advice that it would be ‘more fun’.

It’s a pretty big resort when you take into account the death-defying lift that joins Les Arcs to La Plagne. As a result, there’s great variety in piste ability with La Plagne being well-known to be great for learners, Les Arcs offers more for those who’ve got their turns tuned. What’s great is that a lot of red and black runs have an adjacent blue or green run so if you travel in a pack you can still meet at the bottom. There are plenty of treeline routes if you’re that way inclined as well as a park. With decent kickers, ranging from blues to blacks, as well as rails and boxes the park you could easily spend a couple of hours if not all day perfecting your tricks. Nice bar area at the bottom and pull lift up the side. The off piste I can’t really comment on. Although I do dabble, the snow quality was so poor and avalanche risk so high during our visit, it just didn’t feel right. There were also a couple of really slow lifts, not really a problem more of an FYI.

I normally prepare for lunch on the mountain taking sandwiches, crisps and the like. We ate out once on our last day at Aux Enfants Terrible. The tartiflette was out of this world but the queue was horrific. As can be said for any mountain, if you can eat before or after the classic lunchtime you’ll do yourself a favour. For après you want to head to L’Arpette. A blue run away from 1800 this was the only place we found that had people dancing on tables to blasting techno, your classic après scenario and a lot of fun.

Les Arcs 1800 is basically split into two towns both of similar size. The one at the top seemed to be marginally quieter than the one at the bottom. We were told this was the ‘French’ part of town but not entirely sure what that was supposed to mean. Think of it what you will. Main lifts are closer to the lower town but when I say closer there’s essentially a 2/5-minute walk between the two. You’d be fine wherever you stay as the resort is fairly flat compared to say Alpe d’Huez.

Bars In Les Arcs Worth Your Money

On our first night the checkout gal in SPAR directed us to Chez BouBou, her favourite hangout. This is a French bar, don’t to lose your cool, that offers table service which is a total bonus as the staff are quick and really friendly. There was a great ‘ski bar’ atmosphere, plenty were there for après until late, and with pitchers and appertifs you can’t really go wrong.

Your classic English bar in the mountains. This place is massive and with two pool tables it needs to be. So what’s the best thing about this place? Well, aside from the pool it’s the chips. Pop in for happy hour, pick yourself up a jug of beer for €20 and they give you FREE CHIPS! And not just your regular, poorly cooked mountain chips oh no, these chips are awesomeness! They also show sport so if you’re into that too…

Ambiente was our one shot at seeing a live band. We missed the reggae night on Tuesday but turned up on Thursday expecting a riot. To be honest, it may well have just been the week, it was definitely tame, however the bar is worth a visit anyway. Regular music was great, no monotonous beats here and there was a teeny weeny pool table to have a game on. Good vibes all round.

Restaurants In Les Arcs 1800 Worth Your Money

As we cooked at home for most of the week we only ate out twice. Both restaurants, were typical ‘local cuisine’ restaurants serving mountain dishes. I’m pretty addicted to fondue so I ate fondue both times. don’t judge. La Cabane de Neige was cosy with modernish deco. The fondue was bahoooozy but very delicious. La Marmite was very similar with more traditional interiors, fondue was less boozy than above and was slightly more expensive with charcuterie coming at an additional cost. However, take a peak in the window and see which one you prefer as to be honest, there’s not much in it. Another restaurant that came highly recommended was Chez Clarisse, number 1 on tripadvisor, which we sadly didn’t manage to get a table at. Pre-book folks, you’ve been warned.

I would go back to Les Arcs anytime. Half the mountain wasn’t open whilst we were there and we still weren’t bored. There was plenty to do in town with numerous shops, bars and restaurants and everyone was welcoming and friendly even though we were a rowdy bunch of no-goods. You couldn’t ask for more.

You can check out the resort and piste map on Les Arcs own website and don’t forget to download the YUGE App before you go. 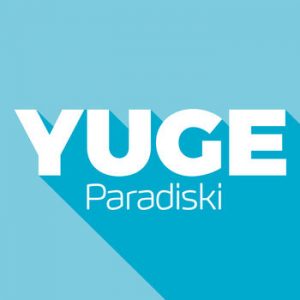 So You Want To Learn How To Snowboard